* I am in no way associated with Babe spinning wheels. I’m just reviewing what I like and don’t like about my wheel.

In 2012 I FINALLY got my first spinning wheel. She’s an antique wheel from The Netherlands. I call her Abigail. I love spinning on her, but for serious spinning she’s just not sturdy enough. 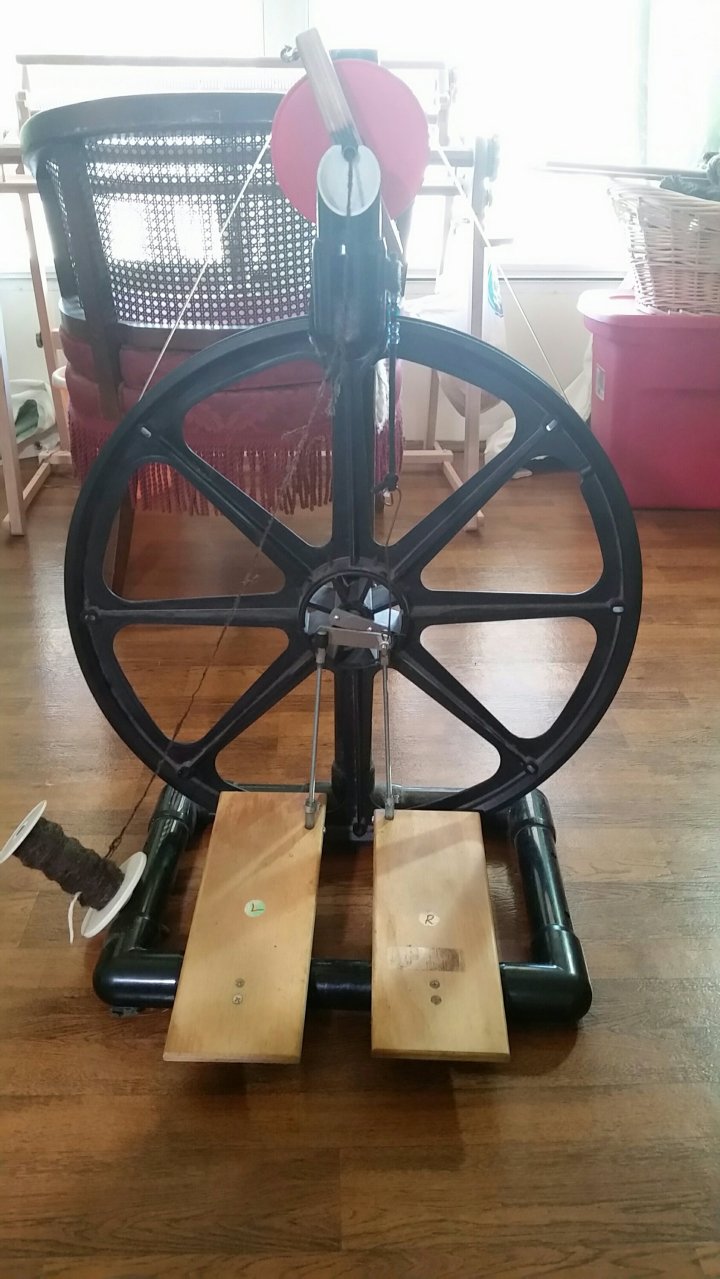 And that’s why in 2014 I bought Josephine – my Babe Production Wheel. I decided on a Babe because it was the cheapest option for a double treadle wheel I could fine at the time. I thought about building one, but then I realized by the time I bought the racing wheel chair wheel, the pipes, etc, I’d pay almost as much for some aggravation without a return policy. No thanks.

My Babe arrived one afternoon and within half an hour I was spinning happily. Not too bad for three hundred dollar plumbing pipes and spare parts. So, let me start by telling you what I DON’T like about my wheel. (And don’t tell Josephine, it would hurt her feelings!)

The built in lazy Kate is kind of a joke. I mean, it’s great in a snap, but there’s no way to REALLY flow with properly tensions singles while plying. Over time I’ve learned to adapt, but the dollar store basket with my bobbins on knitting needles still wins.

It’s plastic. Yes. I know, I bought a plastic wheel. It’s not a major issue, but it’s not PRETTY. It’s not sustainable.

It makes an awful racket when I’m winding off a bobbin straight onto my skein winder while said bobbin is on the wheel. No matter how much oil I feed her, she still complains.

Don’t try to do art yarns on this model. They make a bulky wheel for a reason!

Now, onto the likes!

Overall this wheel spins pretty smooth. I think it’s the ball barings. It’s easy to start and stop, speed up and slow down. I like that!

Another fave feature is the double treadle. My calves are even and if I sprain an ankle I can still spin. Considering it’s typically my right ankle I sprain, that’s a big bonus.

The bobbins are a perfect size. Four ounces is a comfortable size for an afternoon of spinning. Of course, if you’re up for a good game of bobbin chicken six ounces is doable.

The company makes spinning bobbins and plying bobbins. The plying bobbins are hard to miss since they’re bright red and bigger than the others. Since the whorl speed is determined by the bobbin size you can really control the ply twist angle easily. This creates a very consistent ply.

What I really enjoy is that in three and a half years of spinning on this wheel I’ve not had one break down, one problem, one broken drive band. I oil it regularly and spin three to eight hours daily. That’s allot of wear with no problems.

Overall, I’m pleased with my Babe. If you’re looking to get into spinning without shelling our almost a grand it’s definitely worth the investment.

That’s it for thisweek’s Winding up Wednesday.

Moriah is available for speaking engagements. Please contact us for further details.

Author, speaker, shepherdess, Earth Mamma, ordained minister, healer, fiber addict, sister, and daughter. It doesn't matter which title we wear. It only matters who we are underneath.